Make a donation
Please finish the form below

Thank you! Your submission has been received!

Oops! Something went wrong while submitting the form

Committed to countering racism and antisemitism

The Friends of Simon Wiesenthal Center Wiesenthal Campus Initiative seeks to empower and assist Canada’s university and college campus communities in countering hate and intolerance at post secondary institutions across the country.

This web portal is designed to act as an essential resource for concerned students. Here you will find information about upcoming programs and campus initiatives, as well as resources to help you navigate your campus climate and learn how to react effectively to any challenges you may encounter.

Within the last several years, hate and intimidation has been on the rise on Canadian university campuses, creating an atmosphere in which many students feel uncomfortable or threatened. Jewish students in particular are demonized and made to feel unsafe for supporting the State of Israel, as calls for the dissolution of the Jewish state have become a regular feature of life on many campuses. The perpetrators of this new anti-Semitism often try to veil their anti-Semitic intolerance and hate by calling it “anti-Zionism” and invoking the concept of freedom of speech.

While legitimate criticism of the Jewish State is fair and warranted, lies, double standards, and hate speech are not.

With the help of concerned students who believe that targeting a minority group and making them feel unwelcomed and threatened is wrong, we believe we can turn the tide on the increasingly poisonous atmosphere regularly faced by many students on our campuses, and make Canadian colleges and universities more welcoming and inclusive places to learn.M

Make sure you Know Your Rights with this guide.

Free Speech
What Is BDS
What Is Apartheid
What Can I Do?

Freedom of Speech vs. Hate Speech

Today on campuses, students are faced with the dilemma of balancing and navigating the fine line between Hate Speech and Freedom of Speech. Often, this line gets crossed. Yet students who are targeted fear taking action, in the mistaken belief that hate speech is permitted.

So what is Free Speech, what is Hate Speech, and how can one tell the difference between the two?

Free Speech or Freedom of Speech:

The right to express one’s opinions without censorship or restraint. In Canada, Freedom of Speech or Expression is protected as a fundamental freedom by Section 2 of the Canadian Charter of Rights and Freedoms. Section 2(b) of the Charter states:
“Everyone has the following fundamental freedoms:…freedom of thought, belief, opinion and expression, including freedom of the press and other media of communication.”

Freedom of Speech is vital to a democracy, and the Canadian views on Free Speech follow a broad understanding of what ‘expression’ may be. However, there are limits to free speech and free press, as stated in Section 1 of the Canadian Charter of Rights and Freedoms:
“The [Charter] guarantees the rights and freedoms set out in it subject only to such reasonable limits prescribed by laws as can be demonstrably justified in a free and democratic society.”

Any speech, gesture or conduct, writing, or display that incites hatred or violence or attacks, threatens, or insults a person or group based on their national origin, ethnicity, color, religion, gender, gender identity, sexual orientation, or disability. Though Hate Speech does not have an official international definition, the Canadian Criminal Code addresses issues of hate speech in Section 319 and Section 318.

How to deal with hate speech on your campus

Canadian campuses have become embroiled in this debate between Free Speech and Hate Speech. Many students wonder what they can do when met with Hate Speech on campus.

There are a number of avenues a student can take on his/her campus when confronted with Hate Speech:

Unfortunately, there are cases where students’ grievances are ignored on campus. Should your issues not be addressed directly on campus by a campus official/faculty, FSWC has additional methods to assist you:

For more information on the differences between Hate Speech and Free Speech, and on the challenges our society faces today regarding the fine line that separates them, check out these links:

One of the greatest issues facing Jewish and pro-Israel students on campuses today is the growing Boycott, Divestment, and Sanctions (BDS) campaign. Although you may have heard of BDS, it’s important to understand what BDS means for you and your campus, and why your Student Union is so interested in joining this movement:

Anti-Israel groups on campus will often chant slogans comparing Israel to an apartheid state or regime. In fact, on many North American campuses, an entire week is devoted to the demonization of Israel in what is known as Israel Apartheid Week.

So what is apartheid, and why are these claims false?

Apartheid is an Afrikaans word that refers to “the state of being apart.” It is a system of racial segregation that existed in South Africa, enforced by the government from 1948 to 1994. The regime was based on the ideology that different races (whites and blacks) needed to be separated in order to succeed and that it was impossible for different races and cultures to live together.

Examples of Apartheid in South Africa:

So, is Israel an Apartheid State?
The comparisons drawn between South Africa under apartheid and Israel are false and contribute to the delegitimization and defamation of Israel. Put simply, ALL citizens of Israel are equal under the law. Israeli law does not discriminate against any citizen based on their race, religion, or gender: Arab, Jewish, Christian and Druze Israelis have equal rights and access to education, transportation, housing, health care, and safety and security.

It is clear that any comparison between Israel and Apartheid South Africa is not only incorrect, but defamatory. These comparisons are useful for anti-Semites who do not believe Jewish people have a right to national self determination in the land of Israel and wish to sway those who are less informed that their cause is just.

Your Student Union, the Constitution, and Passing Intolerant Motions

For assistance in any of these endeavors, email education@fswc.ca.

The Friends of Simon Wiesenthal Center (FSWC) provides educational workshops and training for students, as well as seminars and speakers. We strive to create innovative and original projects which actively benefit students committed to creating a more tolerant campus. 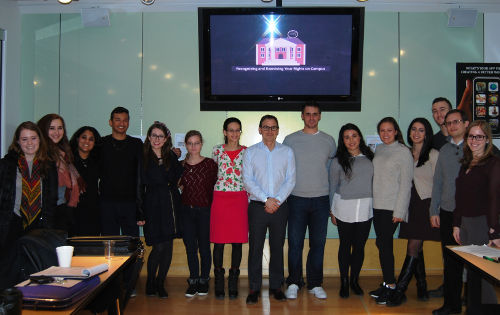 Students from several universities participated in a Legal Training Workshop with lawyer Ricky Brooks in January 2016.

Know Your Rights! Read the guide.

The phenomenon of antisemitism, hatred of Jews, has often been called mankind’s “longest hatred”. The European Monitoring Centre on Racism and Xenophobia (now the European Union Agency for Fundamental Rights) in 2004 added to this definition of Jew hatred,

Antisemitism manifests itself on campus in a variety of ways. 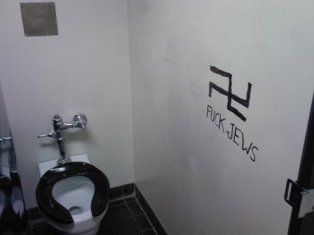 The Main Manifestations of Antisemitism in Campus Discourse:

Friends of Simon Wiesenthal Center for Holocaust Studies (FSWC) is looking for student ambassadors on campuses across Canada. FSWC exists to counter anti-Semitism, hate, and intolerance through education and advocacy. We aim to promote tolerance, justice, and human rights, and work to keep the memory of the Holocaust alive through education.

FSWC is looking to appoint campus representatives who will:

2.     Build relationships with other Jewish and non-Jewish student groups.

3.     Build a plan at the start of every semester with the national coordinator of the organization to help tackle issues on campus.

4.     Organize events during the semester that fit with the organization’s agenda and goals.

5.     Monitor and document any acts of antisemitism, hate and intolerance on campus and report it back to the national coordinator at the FSWC headquarters.

6.     Be the “eyes and ears” on the ground, helping FSWC develop effective, appropriate and engaging programs for the students by the students.

2.      FSWC will interview each student prior to making a decision.

3.      The student will be the ambassador for the entire semester, and at the end of the year FSWC will do an evaluation of his/her work.

4.     Every ambassador will get a ticket to the Spirit of Hope Benefit and a special seminar in FSWC's offices.

5.     Every student will receive a scholarship.

If you wish to become an FSWC Student Ambassador on your campus, or if you wish to learn more, please email: jaime@fswc.ca. We are always looking for motivated, passionate students to help us in our mission.